The first meeting of the year for our two Flitwick racer, Olie and David Linsdell took place on the weekend of the 18th and 19th March.

The all new Enfield “Prince Harry” the Bullet 500 was only just completed, and would be running untested in plain white livery. The intention was that Olie would ride Prince, together with the Formula 750 Rob North Trident belonging to new Sponsor Trevor Mann (Welcome to the team), forgoing the 350 class.

Its safe to say that preparation had gone down the wire this time- building and preparing Prince had taken Steve to the limit, and we knew that development was needed to get it right. And so it proved, with teething problems causing electrical issues, and balance factors causing vibration- two DNF’S saw Olie swapping to the Seeley, taking two 7th places, whilst David continued to test Prince further down the field.

Davids Ducati decided it didn’t like the extremely wet conditions on the Saturday, and just didn’t want to play, with Sunday seeing more problems and a big end failure.

Olie fared better on the Triumph, after pulling in on the Saturday warm up due to atrocious Weather conditions that saw the days racing abandoned, with two class wins on the Sunday, which should see him leading the Formula 750 class. He took the bike out in the Race of Aces, and was having a tremendous battle with another 750 when he had a little slip off- no major damage to the bike and none to Olie.,

So an up and down start to the Season, and much work to do on the bikes before the next meeting at Easter. 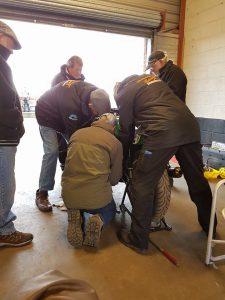 Repairs underway to the Trident- all Hands to the deck!

By subscribing to our newsletter you will always be up-to-date on our latest promotions, deals, news and events!